Men Without Hats - Dialogue, Discipline and Discontent in the Madras Army, 1806-1807 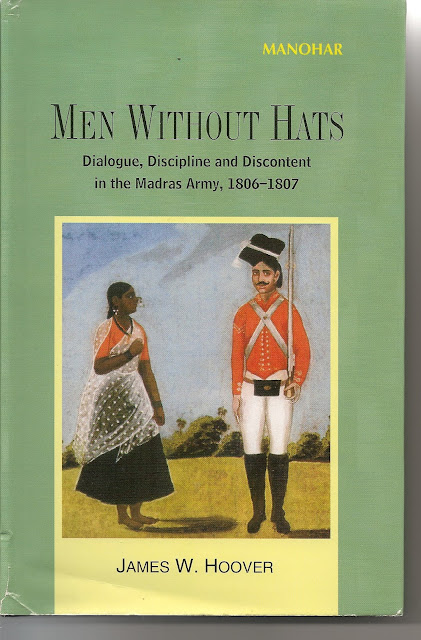 Here is the book that really started The Adventures of Henry Innes on its path, way back in 2003.  This is my non-fiction, historical account of the Vellore Mutiny, which grew out of my Ph.D. thesis.

Men Without Hats is a study of the voluminous records prepared by the East India Company's regime during the inquests and courts martial associated with the sepoy mutiny at Vellore in July 1806, and with a wave of protests and minor incidents that occurred all over South India during the next several months.  In a nutshell, the book uses this well-documented moment to explore the transition from a dialogic, or verbally negotiated, informal Raj to a regulation-oriented, textual form of colonialism - a transition new to both Britons and Indians at the time of the Vellore uprising.  My study questions previous accounts of the Vellore rising, which have attempted to "recreate" events on the basis of the primary documents, and it places the mutiny within its proper context - i.e., within the formal and informal frameworks of relationships that connected (or separated) Indian soldiers and British officers in the East India Company's army.

The research for Men Without Hats was conducted at the Tamil Nadu State Archives and at the British Library, primarily, making use of the enormous record sets left behind by the East India Company - one of the world's most remarkable and detailed archives.

The investigation of the mutiny at Vellore will be the subject of a future Henry Innes novel, Martinets and Mutineers.  It was, in fact, the vague idea for this story that gave rise to the larger vision that has become The Adventures of Henry Innes.

You can buy Men Without Hats online from a number of different vendors.  Prices vary, but the Indian rupee price is Rs. 750, or about $15 US.  You should be aware that I receive no royalties for this book, so find the best bargain you can and help out my publishers, Manohar.

I should note that at a time when university presses in the U.S. and Britain were not keen to publish new scholars' work, I took a chance and "outsourced" my dissertation to India, where the primary audience for my work was located anyway.  My proposal was readily accepted by Manohar, one of India's leading academic publishing houses, and about three and a half years later my revised manuscript became the above book.

Note:  Yes, the author's name is not William Lailey.  But it's still me.

William Lailey
I am a professional historian and a writer of both non-fiction and fictional works focused on the history of India, Britain, and the 18th-19th century world.