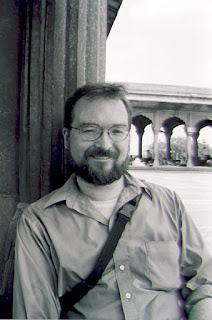 As a child, I had three goals in life - become a historian, travel to interesting foreign lands, and write novels.  I have achieved the first two goals, and now I am in the process of achieving the third goal.  All three of these dreams have been interconnected for as long as I can remember, and they probably will remain interconnected.

My grandmother, in middle age, worked as a cook for a British public school (i.e., a private academy) in the 1940s, after her husband died.  During World War II, she traded petrol and cigarette rations for things her family needed, including - at one point - a children's encyclopedia set.  One of the volumes, entitled "Our Indian Empire," was my favorite book as a child.  I became fascinated by India and its history, and eventually I trained in South Asian Studies and earned a Ph.D. in South Asian History.  I now teach Indian, Islamic, and World History at a public university.  Madras - or Chennai, as it is laid down on the maps now - is my home-away-from-home in India, and a place featured frequently in The Adventures of Henry Innes.

Many academics frown upon colleagues who indulge in fiction writing.  Personally, I don't care.  I, for one, do not share my colleagues' illogical fascination with televised sporting events.  I grew up in California, and I like to think I still have a Californian sense of individuality, a need to do my own thing, and a knack for thinking creatively.  I write works of fiction about the past because I enjoy it, and because I have a good story to tell that other people will enjoy, too.

Since my fictional works closely parallel my research interests, the two activities cross-pollinate.  Information and ideas I encounter while researching my novels become academic papers; academic research, meanwhile, may be distilled into fiction, at some point.  Once I realized what was happening, and became comfortable with it, I allowed the two activities - career and hobby - to form a symbiotic and (so far) very productive relationship.

The Adventures of Henry Innes is a series of novels, so settle in for a long journey.  However, I can promise you a fantastic tale, which took six years to conceive and more revisions than I can count to craft into the novels that I now am writing.  Hopefully, the first of the novels will become available soon.

P.S. - I ought to note that at least a few of the illustrations you will see in this blog are hand-drawn by myself - on whatever surface and in whatever medium happens to be handy, as the spirit moves me.

William Lailey
I am a professional historian and a writer of both non-fiction and fictional works focused on the history of India, Britain, and the 18th-19th century world.